On the longer training rides it can get to be really sad and a bit uncomfortable being without Luke. Until the recumbent trike arrived he went everywhere I did except for the pool. He was trained to signal (bark) in situations when we’re out together and he cannot see me – or if  he can see me but I’m acting as if I’m in distress – or if he can see me but I’m not responding to him. I’ve tried on my own to train him to accept that I’m OK in the pool–to communicate that I’m safe. But either his initial training is far too ingrained or he simply wants to be in the pool swimming with me. He is quite the water dog, so it’s difficult to know what’s going on.

And then there’s the trike.

Luke understands when I have my swimsuit on and the gym bag in hand where I’m headed; at the very least he gets that he’s not going to be coming along. But when I push the trike out the door and ease it down the steps, well, let’s just say he’s *not* cool with not being invited. I swear he waits right by the door the entire time I’m gone. Though I really do hope I’m wrong about that. Elphaba–our rescued pit bull–isn’t ever happy about being left behind but then she’s not used to going anyplace other than on walks, so it’s not the same kind of abandonment or betrayal or confusion for her that it seems to be for Luke. And danged if he doesn’t know how to really rub it in with those big mournful brown eyes when I get back!

Here’s a photo of the bobsey twins looking too adorable to leave. I wish I never had to ~ 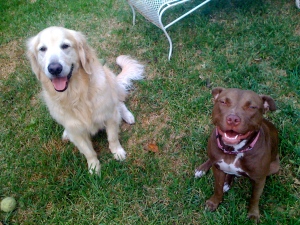