How often do you feel carefree? Frequently? Occasionally? Hardly ever?

When illness and disibility are a part of our lives, it can seem like carefree is a feeling we no longer have a hall-pass for. The burdens of pain and fatigue can make carefree sound like the name of an imaginary island, something found only in fairy tales. I know what it’s like to feel as if you’re always carrying a burden. That kind of weight comes in a variety of forms, many unrecognized by others, even by those closest to you. And, as I spoke of in my last post, invisible burdens can be especially agonizing.

When I was younger I carried the burden of my dysfunctional home life. My mother suffered from untreated mental illness. The face she presented to the rest of the world was polite, poised, oftentimes even playful. Privately, my mother was abusive – verbally and physically – prone to outbursts of bruising violence. She was also given to brutal, days-on refusals to speak. She would talk to everyone else (my father included) but not to me. You might imagine that silence from someone skilled at using her words as weapons would be a relief, but her stares, her turned back, were torture. Her not-talking was just one more manifestation of psychological abuse and withholding. Her revenge-quiet was a buried landmine waiting to be detonated. The waiting was excruciating.

My father was a photographer, and in many of the photos we appear the vision of a tiny, happy family. Sometimes you can catch a whiff of something off, but then you think, it was just the flash, or maybe she was tired of posing for the camera. 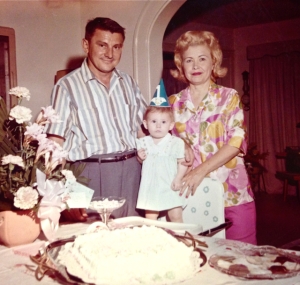 I was adopted and an only child. My mother and father were 46 and 43, respectively, when they adopted me. My mother did not want to be a mother, but my father very much wanted to be a father. My mother (coincidentally or not) could not have children, so my father accepted his childless future when he married her. Then a twist of fate: a doctor (who rented his office space in the building my father owned and worked from) asked my father one day over coffee, “Hey Bengy, how would you and Smitty like to adopt a baby?” The young couple set to adopt me had found out they were pregnant and subsequently pulled out of the adoption contract a couple of weeks before I was born. Perhaps if it had not been a rushed decision on my parents part, perhaps if my mother had been given time to truly consider, or to change her mind. Because, now that I’m grown, I know that she knew her “thinking,” her perceptions, her behavior, were not right a lot of the time. I know she knew that her temperament was not the mothering kind. Perhaps my father did not know. Perhaps he was blinded by his love for my mother. Perhaps he was blinded by his love for the child, the family, he so wanted.

My mother always said that my father caught her on a good day when he asked if they might adopt me. My mother also said, all the time, that agreeing to adopt me was the one moment of her life she most wished she could go back to undo. I learned both of these pieces of information directly from my mother, when I was eight. One of my neighborhood friends told me I was adopted, she was taunting me at the time, and I kept saying “I am not adopted! I am not!” But it was as though suddenly everything made perfect sense. Somehow, without knowing the truth yet, without even really understanding what “adopted” meant, I knew it explained so very much about my family. When I returned home from Emily’s house, I asked my mother if it was true, was I adopted? “Yes,” she said, “your father and I adopted you. It was the biggest mistake of my life.”

I understood, even in my youth, that the moment right before I was placed in my mother’s arms was the last moment of carefree she had ever known. Caring for a baby, raising a child, being a mother – all of it was her greatest, most confusing and painful burden. She was simply not possessed of the patience and nurturance, the un-selflessness of motherhood. She had been caught up, swayed, by love for my father, by wanting to make him happy. But her devotion to him could not change who she was, or who she wasn’t. And once I was taken home, once I was theirs, what was she to do? A woman of sound mind, of more flexible ways, may have grown, adapted, warmed and softened. She may have opened up and allowed herself to fall in love with her new child. My mother did not, either because she was not willing or because she was not able. In her own way, she did love me, I know that. It is also true that she hated being a mother, and that hatred spilled over to her daughter, to me – even if how my mother felt wasn’t visible to people around us or in pictures.

I carried the the secret of my mother’s mental illness and her abuse of me like a too-large backpack filled with dead weight. During my pre-teen and teenage years, when I began to ask for help from teachers and other trusted grown ups, nobody believed the stories I shared about my mother. Worse, I was punished by teachers, condemned by the nuns and other family members, for “lying,” for being an ungrateful child. I was accused of giving myself black-and-blue marks, seeking attention. The deep, sour and burrowing shame of being unwanted – first by my birthmother and then my adoptive mother – was all the more weighty, draining and suffocating because the source and pain of it were unseen, unbelieved.

So I do know, only too well, what it’s like to be care-ridden, to live with a heart and mind chock-full of worries. I have known it almost all of my life. Which is why I’m skilled in the art of escapism. I’m very talented at distracting myself from reality and diving into particular freeze-frames of the light and good in order to block out the dark and undesirable. A long life of being overburdened has made me into a kind of Happiness Bounty Hunter, a Carefree Quester. Even when I was little I knew that special moments were rare, precious. Those moments most often happened when I was with my Aunt Helen or my father, with my dog and cats, when I was ice skating or riding my powered-blue Schwinn, reading, in front of the television or a movie screen, smack between my two stereo speakers, out in the wilds of woods and river, with my toes in sand and my eyes on the ocean.

I remember the day the photo below was taken, and no, it was not Halloween. I was the kind of kid who got very excited by and attached to my Halloween costumes, so I’d wear them throughout the year at random times. I think the costumes were one of the ways in which I was creating opportunities for joyful, for carefree. I know the picture’s blurry, but my happiness, my weightlessness in that moment was so clear that if you’d brushed against me I would’ve rung like the crystal of a fingertip-circled goblet. I still remember thinking that if the breeze through the single feather in my headband felt that good, imagine what it would feel like if you were a bird whose body was covered in feathers? 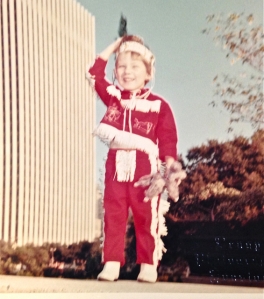 I started, just now, to write that feeling carefree is the best medicine of all. But feeling carefree – those sanctuary, out of body, out of mind moments – is sweet, bubbly sips of a life where no medicine is ever wanted or needed, where medicine as a word or concept has never existed. Because illness, disability, pain, are nowhere to be found in the outside-of-reality that is “carefreeness.”

In adulthood, in a life partnered with illness and disability, my burdens are more physical. There are emotional and spiritual burdens.  Combined, that weight makes it really challenging to arrive at anything close to feeling carefree. Which is why any distractions from the realities of MS, from pain, fatigue, isolation and loneliness, are so greatly coveted, so desperately necessary. Random moments of bliss, any scraps of comfort and feeling carefree have to be grabbed hold of with both hands, relished and celebrated, truly and wholly savored. My service dog Luke has been a genuine mentor in regard to carefree and savoring.

I find those moments laughing at silly things with my husband; with Luke, and our other fur-kids; with the company of beloved friends and family; while out riding my recumbent trike, where I feel strong and independent; swimming in the solitude and serenity of still water; while adventuring through hilarious and healing books, watching films and TV shows, listening to music; traveling; teaching; taking in the transformational art of others; taking myself to nature; happening upon the wonderful; having the wonderful happen to me out of the blue. I am often taken completely by surprise by carefree moments. Those can be the best kind of all. You have to search out, to create carefree in your life. You have to partner a No Opportunity Wasted rule to any and all possible “carefreeness.”

My dear friend Michelle posted this video on her Facebook about photographers capturing what they call “carefreeness” for a group of people with cancer. Watching the video of burdens being lifted – as if they never had existed – I experienced my own accidental and unanticipated carefreeness. Life is like that: unexpected moments, unexpected gifts. And what I especially love is how the carefreeness meant to be created for one specific set of people has extended out, and out, and out, into circles of carefreeness. This story of crafting the gift of carefreeness keeps accumulating more chapters. The moments of shut-out-every-burden, silence-every-single-worry in order to let in shock-waves of delight – these moments, they are multiplying exponentially. What a golden, shiny movement of joy. What a stunning, radical revolution of carefreeness.

For someone like me, carefree moments are priceless. Perhaps they’re priceless to everyone, even when they’re not immediately recognized as such. But, really, who can’t use a few extra moments of having every care lifted away and being filled with happiness, with utter light-as-a-hummingbird peace. If only for a moment.

A small group of people – the Mimi Foundation – came together to give another small group of people some much-needed, much-deserved relief from the weight of their day-to-day reality. Now comfort and joy are doing virtual road trips across the globe through the grapevining of this brief, beauty-full video. What great, tinseled tidings for the season. 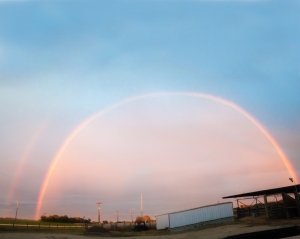 If I could go back in time, I don’t think I’d have the courage to undo my mother’s agreement to adopt me; I loved her so very much, in spite of everything. What I would do is go back and tell her everything I’ve learned about carefreeness. Sometimes, a single moment of it is all you need to make it through. One second of carefreeness, at just the right time, can save you.

Please, pass that video on. And on.