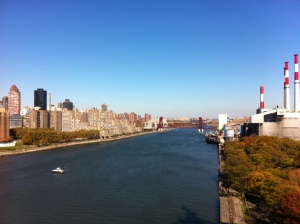 I met a handcyclist on a bridge–it was a big bridge with a great view, the Queensborough, I think–and he’s somebody you should know about. His name is Paul Kelly and his story is worth sharing. Paul truly inspires me.

Check out his blog 2008 Miles of Hope, where Paul states:

“As an American with a disability, I understand the challenges that face these brave men, women, and their families. I also find their personal stories of triumph over adversity to be my motivation. There is no better place in the world to have to live with a disability than the United States. We are blessed with technology, opportunities, and compassion that are available nowhere else.” 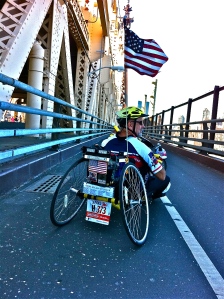 He and his wife Sally both raise funds and awareness for our nation’s wounded soldiers. Paul rides with Team Hope for Warriors; Sally is also doing a marathon. Together, they’ve raised over $38,000 for this worthy cause!

This is Team Hope for Warrior’s mission statement:

“Team Hope For The Warriors® unites the wounded community with athletes and their supporters in the combined goal of competing at endurance events worldwide. For the wounded, the Team engages the competitive spirit so that these warriors are once again defined by their achievements rather than by their injuries. For able-bodied athletes, the Team provides an opportunity to take personal goals to the next level by fundraising in honor of America’s heroes. As the Team grows, it is our wish that all of our athletes will be motivated by a community’s pledge that no sacrifice will be forgotten, nor need unmet.”

What’s more, this guy really got me pedaling up the incline of that daunting bridge. I’d been struggling, to say the least. The runners were zooming by on the main thoroughfare of the bridge to our left. In the odd mix of light and shadow, wearing a rainbow variety of brightly colored jerseys, the racers looked like Skittles with arms and legs chugging by over there.

Paul had two volunteer guides from Achilles accompanying him. I wish I could remember their names but I was in a kind of cycling-induced brain-fog that happens when I’m attempting to manage pain and persevere in the face of an obstacle (like a huge frackin’ bridge-incline with my bad knee violently rebelling). Paul’s guides were really sweet to me: they took photos for me, cheered me on, engaged me in conversation so that I’d be a little less focused on my physical state. 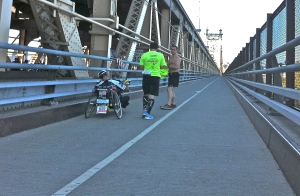 We all paused to rest a moment and take in the view on both sides of us: those runners, the river and the cityscape and the boats.

It was sunny out but we were in the shade of the overhang of the bridge, which is why I look like I’m cycling in Alaska–over iceberg-infested terrain–instead of New York City. (and also why these photos look a little odd;Photoshop to the rescue)

After a bit Paul’s guides took off running ahead of us. They needed to get a really good head start because we were at the apex of the bridge where Paul and I would be going from knee-screaming pedaling uphill to Woohoo! flying-downhill mode. So Paul and I had a great conversation while we allowed time for his guides to run the rest of the bridge and get into position at the curve of road after the bridge’s end, where they’d reunite with him.

A note of interest: NYRR places a row of hay bales, stacked two high, and flanked by those neon orange traffic cones, at the curve that comes right after the end of the bridge. Apparently racers with wheels, like Paul and I, have been known to have too much of a good time on the free ride down, failing to realize the need to slow down (brakes!) sufficiently for that turn.

Of course, if NYRR would simply move the far line of that turn out about 20-30 feet, there wouldn’t be such a sharp turn. Alas, the race-course is calculated for runners and the occasional walker–not those of us with wheels–as the primary concern. With the extra room for turning, those of us who have to go all-out cranking and turning push-rims and pedaling the long slog UP the bridge would get to enjoy the fruits of our labor for the duration of DOWN.

Which would be really, really sweet.

Paul Kelly and I found we have a lot in common as we talked atop the bridge; namely that we were both racing the New York City Marathon that day for causes we’re deeply invested in. He for those wounded warriors, and me for a slightly different but no less valiant brand of warrior, our nation’s firefighters. Paul and I are hoping to ride together in the future; perhaps a joint ride for our respective charities of choice. I love making connections with other 3-wheelers riding for a cause. I get inspired all over again, for their charities and for mine!

Thank you, Paul, for all you do for our country’s soldiers. And thank you, also, for firing me up for the remainder of the race. We happened upon one another on that bridge right when I needed some cheering on–a reminder that I wasn’t alone in wheeling uphill. Roll on, my friend! 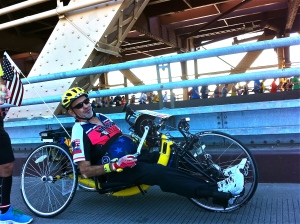 I have until November 21st to meet my goal of $3000; I would be incredibly grateful if you’d help me help firefighters get the much-needed training & equipment they need!

If you’re not familiar with my association with Team Leary Firefighters, you can read the story on my ABOUT page.

2 thoughts on “You Need to Know”