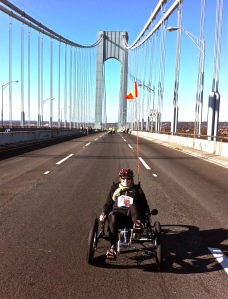 To tell you the truth, I didn’t know if I was going to make it to the Finish Line.

This has been a rough year health-wise. Not in terms of actual MS exacerbations–in fact those have been fewer than in any previous year–but in terms of pain and fatigue. We’re talking Off The Charts-awfulness.

Also, my vision has reached new lows. Double-also, the symptoms of gastropaeresis–a condition caused by MS–are worse than ever before; the pain from that source, alone, has been crazy-making. So my goal was to make it to the the Starting Line, pedal across it, and then make it through 26.2 miles, till my wheels rolled over the Finish Line.

I succeeded in my goal. Even though I don’t exactly feel triumphant.

My finishing time was almost double what it was last year, which, at certain moments, hits me square in the ego with a resounding *splat* and embarrasses me.

After last year’s marathon my first thought, my then-goal, was to shoot for what most racers shoot for: bettering their previous time on any given route. But as 2011 went on it occurred to me that I might not be able to beat last year’s time of 3:36:46. By this summer, given the way I was feeling, I began to wonder if I’d finish the marathon at all.

On my birthday (late August) I rode my favorite training route along the Texas City Dike and Skyline Drive. My birthday wish–made 5 miles out, in the middle of Galveston Bay, the end-point of the dike–was that I’d make it to the finish of the 2011 NYC Marathon. Actually, it was less a wish sent out to the universe, and more of a promise that I was making to myself. Luckily, I was able to keep it. 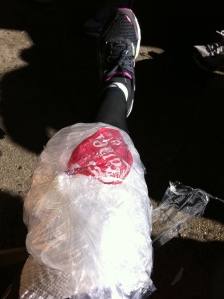 When I was sitting in the medical tent of the First Aid station, around mile 20, with a humongous ice pack on my left knee (wanting a way to ice my right hip that wouldn’t involve me sitting on a bag of hard-as-rocks ice cubes) there were a couple of things I kept sending–like they were on a visualization conveyor belt–through my mind. First was the firefighters that I was raising awareness and funds for as part of Team Leary Firefighters Foundation. I told myself that if those men and women could run into burning buildings when everybody else was running out, then I could keep pedaling forward through the pain and fatigue to make it the rest of the way to Central Park. I didn’t want to let them down. And I didn’t want to let the rest of my team down, either. 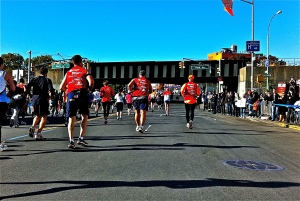 (those 3 red jerseys, those are my LFF teammates, tearin’ it up)

Second was all the good folks who donated to my race, to “my” firefighters. I had to honor the faith all those donors placed in me. I had to meet my end of the bargain we’d made: they give money to a worthy cause, and I give my time and energy, doing the leg-work on the big day–seeing it through till the last inch of the last .2 mile.

Then–okay, you’re going to laugh at me about this, I just know it–there were three “heads” on the conveyor belt of visualization rotating through my mind’s eye. (I tried imagining each person–the whole person–but seeing them sitting there, indian-style, like a piece of Samsonite waiting to be picked up at the airport, cracked me up more than it spurned me on!)

First up was my husband Gary’s face. 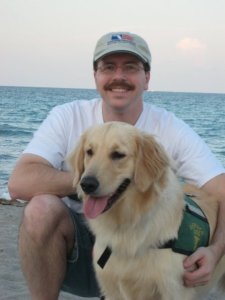 That guy really should have his photo in the Visual Dictionary next to “devoted.” He has been my partner, my cheerleader, my provider-of-all-things-loving-and-supporting. There’s no way I would survive life with MS without his constant presence, his unequaled friendship, his sideways-hilarious sense of humor. For sure, I would not be doing things like setting goals of finishing marathons without him. He’s always, Always, ALWAYS there to hold me up, push me forward, pick me up–figuratively and literally–when I fall down. I imagined him there. I heard his voice, saying “Go, Nise! Go!!!”

Denis Leary was the second face/head, because he founded this phenomenal foundation serving firefighters. Because he crafted this good and necessary way to help firefighters get the training and equipment they need to perform their jobs, to save lives. Because he conceived of this foundation out of a place of personal, devastating loss. Because he took that grief and transformed it, into a life-changing, life-saving organization. Because I had pledged to join Denis Leary in his never-ending quest to bring firefighters front and center, to get them the recognition, honor and gratitude they deserve. Team Leary Firefighters Foundation, the director of the foundation, Mardi Grant–they welcomed me, a challenged athlete who pedals instead of running (or even walking); they advocated for my right to not only be on their team, but to use a recumbent trike as reasonable accommodation for a disability.

I had thrown in with Leary Firefighters Foundation, they had thrown in with me when it counted most, and now it was my turn to do my part, to follow through. So I imagined Denis Leary’s voice saying to me, “Get the f*%k up!  Get the hell outta here–get out there.  Christ, we don’t have all day–MOVE!”  Or maybe it was Tommy Gavin’s voice 🙂

The next face/head was Michael J Fox. If you read earlier posts on this blog, you know that I claim him as my hero. He’s the person who helped me to reframe my life, my future, how I saw myself–what I was capable of–in relation to illness and disability. From his words, by his example, I learned to look at a life intersected with MS as a blessing rather than a burden. I learned to look for opportunities–to look closely and creatively, with a wide-open heart and mind–because those opportunities would often be disguised as challenges, as problems, as pain.

In 2002 I had the immense pleasure and privilege of meeting Michael J Fox when I was invited to be on the Oprah show and talk about why he was such an inspiration to me. Fox is still my hero; he continues to teach me by example and with his words. His face/head was on the merry-go-rounding conveyor belt to remind me that pushing through this particular day, this particular race, was an opportunity and a blessing. Even if the pain was so great and heavy a burden at the moment that I could not imagine it as either. So I conjured his voice saying to me, “Just keep going, you can do it!”

On the Oprah show that day, Michael J Fox got up out of his chair on-stage next to Oprah and came down the steps to the first row where I was sitting, to hug me. I don’t mean to get too schmaltzy here, but that embrace felt to me at the time like a real connection, an acknowledgement, a kind of tangible recognition. That we had both been to that place–the dark place where a life recently intersected with illness can take you–and we had both found a way to make it back out into the light, to carry the light forward with us.

The only difference being that Michael J Fox was the reason I’d been able to find that light. I basically followed the torch he carried; lit my own flame from his.

So I listened to his voice, telling me I could do this thing. I had the EMT cut the ice and plastic wrap off my leg, picked my torch back up again and headed out of the shade of the medical tent into the bright sun of the race-course with all the runners in their bright colors flashing by. 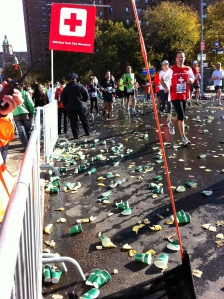 I told myself: you have to put your butt in the seat and keep going, because it’s possible that someone else needs to light their flame-less torch from yours, and you have to be out there, you have to push through the pain even though it feels impossible. If there are others stuck in the “I can’t” place–that quicksand of mental mud pit you’ve known too many times before–your light will be up ahead for them to see, to follow through to the end. All the way to the finish line.

Once I sat back in the seat of the trike and reached my right foot to the pedal, the pain in my hip shot forward like an arrow made out of barbed wire. When I raised the other leg and settled my foot into the pedal, that knee felt as if it were being dipped into a vat of boiling lava. I swear to you, I did not think I would be able to pedal another 6 or so yards, much less a single mile.

But I visited and revisited all my motivations for not quitting. I pushed the ON switch and watched the parade of those faces/heads again and again, pausing to take in what each one meant to me. I listened to all those not-real voices, each real but not-real personal message to me. And all of it, all of them–put together–got me pedaling again.

Here’s to both visual and audible hallucinations!

Thanks to everybody–the inspirational faces/heads on my conveyor belt-of-motivators. And each of you, for encouraging me, for being there, for helping me through ~

Remember, walk, run, pedal, towards the bright blue. Always follow the light. And don’t forget to be a carrier of light!  Because someone might need to follow you. 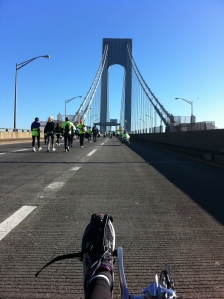 I only have two weeks left to reach my fundraising goal and I really, really need your help!