This is the first recumbent trike that I ever rode.  It had been donated to Workshop Houston, back when it was in its first incarnation of Third Ward Bike Shop. Nobody really rode it because, to the kids, it wasn’t very cool. But some of them were interested in helping me take the trike out of the back storage space to see if I’d be able to ride the trike. And they vied for who would get to hold Luke’s leash while I went on the trike test drive.

The seat needed to be moved up or the boom needed to be shortened, because my legs barely reached the pedals for an effective cadence, but nonetheless, I was riding–I was cycling–something I’d not been able to do in over a decade. 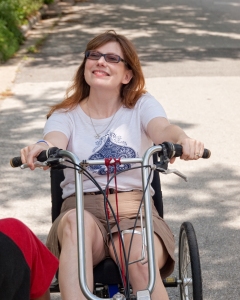