I haven’t been able to ride since the marathon, unfortunately.  I managed to aggravate the muscle injury (sustained the week prior to the race) in my thigh/groin with the marathon miles, as well as decidedly infuriate the arthritis in my left knee & right hip.  I’m convinced it was a combination of the hills/bridges & the headwinds that caused the inflammation from the arthritis to become so nasty, since I’ve covered similar distances without this severe of a reaction in the past.

So, anyway, I’m banished from trikeness for at least another week.

The silver lining is that I’ve been walking a lot more.  Luke & I used to walk quite a bit on Hollywood Broadwalk near our neighborhood in Florida.  3 miles, about 15 ft. wide of paved walkway ribboning the Atlantic Ocean on one side & little shops & cafes & inns on the other side.  On an average, even overcast, day, the view was always restoring.  And I had good friends with which to walk there, as well, which always made the steps go by so much faster.  On days whenthe pain & fatigue index was nudging higher, those conversations, the connection & distraction of stories in my friend’s animated, familiar voices would carry me. 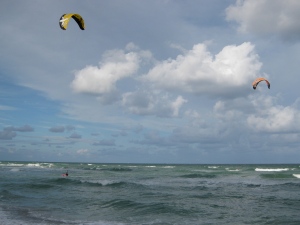 When we moved back to Houston our walks became fewer and much shorter.  The neighborhood where we live right now has uneven, broken up sidewalks, and many streets have none at all.  Attempting to traverse the cracks and crumbled levels of concrete – even with a service dog as reliable as Luke – is much more stressful than relaxing, and I have to go so slowly that neither of us is really getting true exercise.  Thus, Luke’s exercise comes in the form of chasing tennis balls in the backyard till my shoulder is too tired to throw anymore, and my exercise – when not from the trike riding – comes from my daily mile swim & Pilates.

I have missed the long walks, though.  Of course I miss those friends (Denise Duhamel, Nick Vagnoni, Leonard Nash, Esther Martinez, Renee Phillips & Sheldon Frank – my walking buddies!), our conversations, their great stories & animated company, but I also miss the way Luke & I felt–the vibe between him and me, regardless of anyone else–while on those journeys.  There’s something about the way he steadies and protects and guides me – over those longer distances – that deepens the bond between us.  I knew that, but until our trip to New York City where walking blocks and blocks is the norm – and walking in Central Park was such a gift – it came back to me.  How much closer I feel to this companion of fur and four legs when we are out together for extended journeys.

I’m glad, actually, that I managed to injure myself and then annoy the various arthritis-ridden joints, so that I could be occasioned to remember what I know, what I’ve missed.  And I have to confess I do feel guilty that I’ve cheated Luke out of those walks we’ve not been having since moving here.  I intend to remedy that from here on out.  Of course I’m only guessing that he’s missed them as much as I have, that he’s missed that particular kind of closeness. 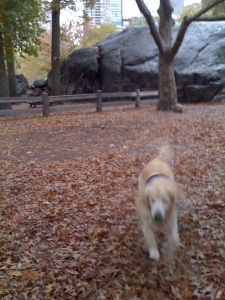 His wagging tail and perked-up ears and deer-leaps and silly circling seemed to scream Oh, look at these leaves, this grass, these rocky outcroppings and footbridges – it’s all so much better than home!  The dirt, the air, the sticks – all of it seemed to taste better. Even the other dogs in Central Park seemed more to his liking.

Luke is literally not just a fan, but a fanatic, when it comes to Central Park.  I wonder now, too, if part of his heightened enjoyment might have to do with the recommencing of our long, luxurious, heart-pumping, adventuring walks.  I’d like to think so. 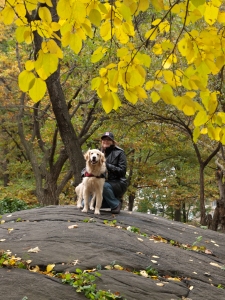 I know a couple of these photos are blurry, but, seriously, look how happy this dog is!

1 thought on “Missing the Trike, Walking, and Luke”